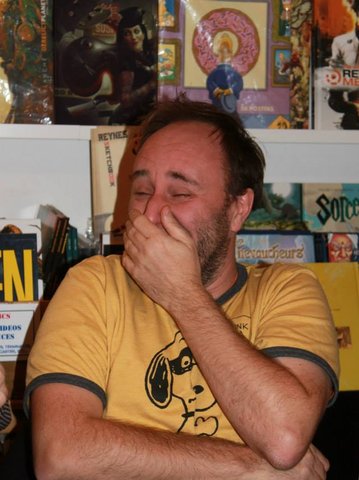 A little bit about myself...

I was born in Brussels in 1967. I started working as a professional comic book artist at the age of 20 for 'Le Journal de Spirou', drawing lots of illustrations and pages for about 9 years. It's during that time that I started 'Cosmic Patrouille', a superhero parody series.

After that I cowrote and drew 6 albums of 'Mort de Trouille', a young adult series for Casterman.

I then moved on to draw for the American market. I started with Batman illustrations in the animated style for DC Licensing. I also drew pages for 'Adventures of Superman'. For Image comics, I drew a Tale of Tellos and for CrossGen Comics, a 6 issue mini-series called 'The Crossovers'.

Back in France I started a long lasting and joyful collaboration with Bamboo Edition drawing 7 albums of 'Basket Dunk', 2 of 'Cosmic Patrouille', 3 of 'Les Profs' and 5 of 'Boulard'. I'm also the author of 'Garance, Une Bien Belle Nuance de Rouge', an album I created for their Adult imprint Grand Angle.

Oh, and Mauricet is a nickname.